The second in my series of monthly writing posts. Here is a recently written short fiction work. (All rights reserved Cathy Cullis) 2020

They walked across the mud, making big quick steps, avoiding a leaf-and-bark filled stream. The smell of dark earth is so intoxicating, the mother thought to herself. Then they walked around the weather-beaten grove of small oaks and the children skipped ahead a little, through the long pale green grass of spring. ‘Still so young really,’ the mother said aloud to the trees. ‘Yet so crooked.’

There was a different light in the woods. The woman could make out a shape by a tree stump. At first she thought it was an abandoned baby’s coat, or a sack of something. ‘Mummy, its ribs are sticking out! Her eldest, a boy, shouted and pointed with his stick. ‘Look, it’s a thing!’ Then her little girl said, ‘Mummy, can we look after the rabbit, can you sew it up again, can we just - but Mummy, why?’ She began to cry, but a kind of dry cry as if she was trying too hard to be upset.

‘You both know it’s quite dead,’ the mother said in a matter-of-fact way, though she swallowed hard and buried her hands in her pockets as she leant down to get a better look. It was a hare, with those bent remarkable legs, its gut ripped open, rib cage crushed as if something or someone had stood on it perhaps. She knew she was looking at it in a forensic way. She was shocked by a lack of smell, but that would come later, when the day warmed up. It looked like it had been dead a while, but how was she to know. The only reference she had to this kind of thing was seeing a fox dead in the road, last summer. She had observed a neighbour attempt to remove it from the road by sweeping it with a broom. Stupid man! She had thought then, watching him wrap it in bin bags and sweep it into the gutter.

‘It has very long ears and very long legs, so it’s not a rabbit, it’s a hare,’ the mother said now, patting her daughters head. ‘It was.’

The mother almost wished she might join in with the singing, it had such a resolute jolly tune, even if the subject was a little macabre. This is the way children come to terms with things, seeing things like death, she told herself. She did not sing but stopped a moment by the post box and posted the letter she had meant to post the day before.

Later, the mother was sitting at her study desk and trying to remember the password for something when her daughter came into the room and handed her a folded piece of paper, or several sheets folded together. It was a comic the children had made titled: Guts, Bones and Fur. Inside the pages were drawings of dead things - or what looked like dead things. There was a lot of blood red crayon. The woman was quietly shocked yet elated by their great creativity. She knew this was mostly her son’s work. His spidery handwritten labels for the drawings took up much of each page. The drawings themselves were small, intense.

‘This is very good,’ she said and turned to see her son standing in the doorway, the shape of him backlit, his arms holding - it looked like a hare, a hare quivering a little. She blinked and looked again to see he was holding a jumper, it was just a jumper, twisted about his arm. ‘Oh, it’s just your jumper!’ She gasped and turned away, took up her pen and looked out of the window as if now completely disinterested in anything.

‘But Mummy, you haven’t read it properly,’ her daughter said and prodded at a page.

‘Yes, I know. It’s far too good for me to rush-look at it now darling,’ the woman said. ‘You see, I’m busy right now. So I will save it as a treat to read later this evening.’

That evening she made a big pot of soup with chickpeas and winter vegetables, and both children ate it hungrily. When her daughter took the last piece of bread her son, sulkily whispered, ‘Yes, it’s hare stew, silly. Hare’s breath stew. These funny little chunks are hare, silly!’

‘You’re a mean fox!’ the girl said and crammed her mouth full of bread, ate greedily.

The boy stirred his soup. ‘This is the best hare’s stew ever, isn’t it Mummy? Fresh today.’

His sister threw her spoon at him but it landed on the kitchen floor and the girl simply, quietly, slipped off her chair and got herself another spoon from the drawer.

‘My sister and I were just like this, you two,’ the woman said, ‘friends one minute, enemies the next. It was just the way things were.’ After this her children ate quietly, saying nothing more. They did not want to hear their mother reminisce.

It was his turn to wash up, so the boy filled the sink with too much soapy water and stared out of the window. ‘Look, look! Look at it  - a hare! Alive!!’

It was dusk, the sky wasa bright scarlet with moving dark holes, or crows. The woman looked to the tree-lined horizon, beyond the garden but her son became more insistent and grabbed at her arm, used it as a stick to point with. ‘Look there by the yellow things!’

‘The daffodils?’ the woman asked, sleepily. ‘I don’t see - ‘ But it was then that she did see, a greyish moving creature, a thing, and it looked like a hare. A smallish hare, or could it be a rabbit? Or could she simply be seeing things, such was her son’s urgency. It might be a cat. Or? No, it was not a cat. It was definitely a hare. ‘Those eyes - but we’ve never had one in the garden before!’

‘Who says we haven’t?’ her boy said, ‘it could have visited hundreds of times before, it’s just now -  now we know.’

‘We know what?’ the mother asked.

‘We know what it will look like when it’s dead,’ her son said. 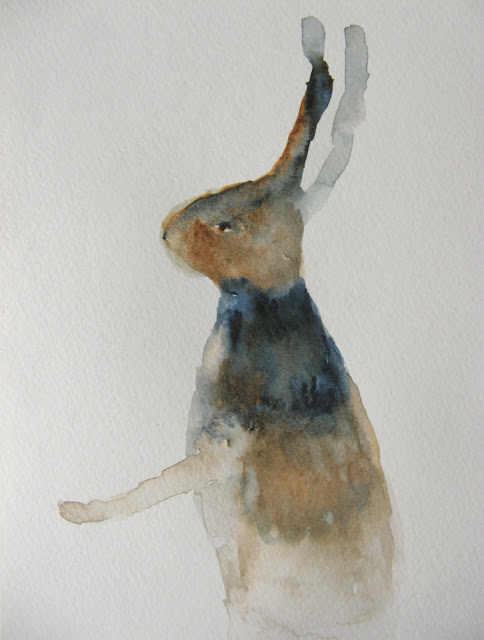 **Thank you for reading. If you would like to support my writing and publishing projects you are welcome to buy me a coffee - thanks so much.

I loved reading this sweet and sad story. The way the children coped - so true to life. I felt I knew this family. Your hare painting is a piece of delicate perfection.

hi Cathy, loved your story...I could see it happening in my head. I really love the unsentimental description of how children behave (I'm a story teller myself)

thank you for reading!

Thank you for sharing this and your works of art. It was beautiful(along with all your art work). I am glad I found your blog because your stories are so interesting and they keep my attention which honestly is a chore. Please never stop with the stories, poetry and art. They bring me much joy.

From Across The Big Pond!

P.S. I wish I could buy you that cup of coffee!

Yes a new series of tiny paintings has begun... I shall be working on these through the spring and summer months (and possibly beyond but a... 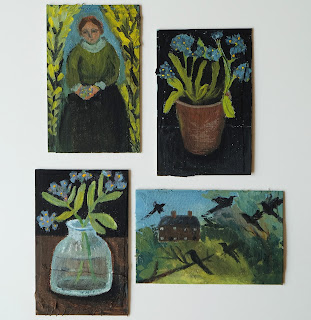