New for this year - I will be sharing my writing with you here - a short story or poem(s). One post each month. To begin, January's read is a short story I wrote last year. Illustrations are from my recent sketchbooks. 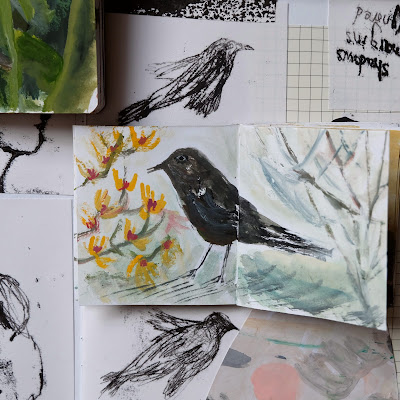 It was a hard winter. Grandfather went out into the ice to catch a bird. Eventually a blackbird came to peck at the crumbs. Grandfather’s stiff arms captured the bird. The lady blackbird was so cold it could not fight out of his locked arms.

Now we will have something to eat, Grandfather said.

His three grandchildren did not think so. They were sure the bird had a name, a family, another place it should be.

The bird sat on a shelf. She seemed to be waiting patiently for something to happen. There was no need to use a cage.

A few hours later and Grandfather was making a small chair for the bird.

Why does a bird need a chair? The grandchildren asked.

Grandfather placed  the chair on the shelf. The bird hopped upon the chair.

The bird looked quite regal. Soon it was telling Grandfather all sorts of things. It would only speak to Grandfather. The bird demanded seeds, water, a small mirror, a box of sewing things, a pillow filled with lavender, a picture postcard of Paris.

The lady blackbird would not tell him.

Grandfather told his hungry grandchildren that he would have to grow a beard now. The blackbird wanted to see what he might look like. He was not an old man.  He was youthful and tall and fair. He knew it would take time to grow a beard, yet each day the lady blackbird looked at him with hope.

He felt sure she was falling in love with him. And he with her.

They talked of old times, when the weather was always gentler and Grandfather kindly returned eggs to a nest. The lady blackbird, Grandfather said, thought he was the kindest person she might ever know.

The children were so hungry. They were tired of just bread to eat. Their mother had gone to a far-off city to work in a hotel. Their father had been eaten by a bear. They wished either of these things might happen to them. They played a game: hotel or bear. To play the game they used a mop, a broom and a carving knife. The game always ended badly with someone crying, more often than not all of them crying.


Grandfather had news. He was marrying the lady blackbird.

Then she will be our step-grandmother, the eldest child said to the other two. She will boss us around all day. How are we to tell our friends we have a blackbird grandmother?

Grandfather’s beard was growing very slowly. He admired himself in a tiny mirror. Soon it would be his wedding day. They were to have the ceremony out in the woods. It was to be a very private affair and the children were not invited.

She cannot really marry, the children agreed. She just wants him to take her outside, into the woods, then she will fly away.

Grandfather was out in the woods fetching firewood. The eldest child decided to try and chat with the blackbird.

But you will get into such terrible trouble, the lady blackbird said. She had such a warm yet rasping voice. She had the voice of an old lady.

The child stared at the bird. Well I suppose I would get into trouble, the child said. Grandfather would send me to bed without any supper.

The bird flicked her tail feathers and shuffled about on her little chair. So you see, the blackbird said, always best to go with the flow. Your grandfather and I will be married soon. Then things will get better for you all. He and I will grow a garden.

Is that some sort of metaphor? The child asked. She was a bookish sort and always sceptical. She knew when it came to speaking creatures one had to be very sceptical indeed.

The bird did not reply. She looked at the child with one dark eye.

I still think you should fly away, the child said. We kids don’t like you. And you can’t like us.

That evening the children waited and waited for Grandfather to return from the woods. They stood by the window to see him. They waited for the tall shape of a man carrying logs. No shape appeared. It was very dark. The moon was a speckled thing.

The next day, hungry and tired from waiting up most of the night, the children set out to look for Grandfather. The eldest child left the cottage door open, just a tiny bit, so if she should choose to leave now the blackbird could tiptoe out.

They walked so far into the woods and did not see a soul. They could hear nothing at all. Then the smallest child sat on a stump and began to sing a song their mother had taught them.

Just then the lady blackbird flew out from a bush. She flapped and danced about them.

Go no further, the lady blackbird said. The hungry bear ate your Grandfather! I’ve seen his tattered shirt and bones, it is a pitiful sight! What shall ever happen next! Go no further! Run home children!

So the children ran home and locked the cottage door. They looked out of the window and saw the lady blackbird flitting and flying in the snow. Was she happy or sad? It was so hard to tell.


A few days later and a neighbour came to their cottage. He was an elderly man with a kind face and worn hands. He thumped a bag of bread and other good things on to their kitchen table.

A blackbird came to me, the neighbour said. Don’t think it a madness. She flew at me and spoke.

We believe you, the children said and ate the neighbour’s food.

I promised her I would come here and give you all the food that I have, the neighbour said. He stood, wringing his hands. He watched the hungry children. Such a pitiful sight.

Now you will be our Grandfather, the children said.

The children stared at him. Oh well, the eldest child said. Then there’s only one thing you can do. Go out and find that blackbird and marry her. Then she will be happy. That is all we want from now on.

You must! The children said.

So the neighbour went into the bitter chill of long winter. He walked across the gardens. He called out and the lady blackbird came to him.

And they shall live happily ever after, the children said. 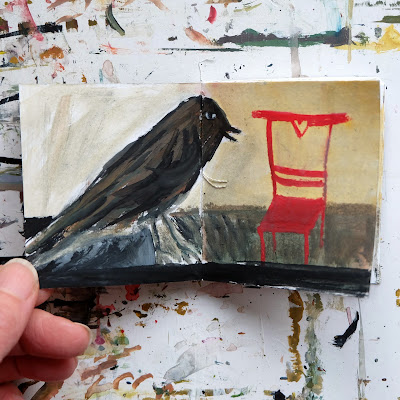 *****
I hope you enjoyed reading. Would you like to support my creative writing and publishing projects? If you can, please consider buying me a coffee here. Many thanks!

Avalanche Looms / Susan Johnson said…
I keep thinking about it, yesterday & today. I love fairy tales, and the modern form of this one. Very intriguing
22 January 2020 at 05:25

Popular posts from this blog 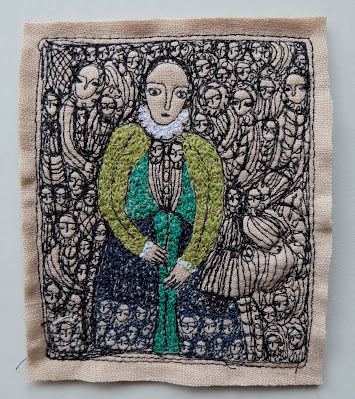 This new embroidery piece is a work I showed in progress last week. It is now complete and will be in my shop update in just a little while - along with a selection of new paintings and stitched needle books.. Thank you again for all your feedback and kindness re: my week of blogging. I will write more about my week, future plans etc... some time soon.
Read more 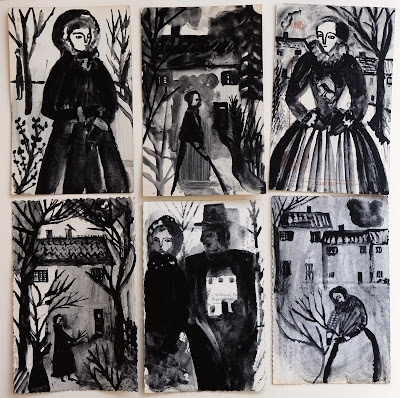 A new series of monochrome gouache postcards - these are original drawings on vintage postcards (with picture scenes on the reverse side) - most of the cards have some printed text and a few have a little handwriting. The paper varies and it was interesting to take advantage of a coated surface which is slightly resistant - the potential for mark-making is intriguing.... I hope to continue on with this series through November. Also, during November I hope to continue stitching and making smaller pieces, especially brooches. here is a new trio.... I will have a selection of brooches in my shop tomorrow (along with the postcards)...  As you may know, England is going into a month-long lockdown very soon. I have stocked up on essentials (sewing machine needles, thread) and am planning to work on smaller artworks through the weeks ahead. I will be offering work at special prices too. Your interest is so very much appreciated. I will be updating my shop as usual, every Wednesday at 8pm UK
Read more 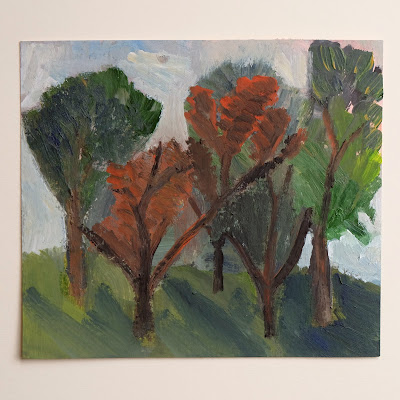 A look at just a few of the new paintings I will be adding to my shop in a short while.... Above is a smaller painting, a landscape inspired by walks in my local park. interior with sofa and paintings Reading corner
Read more